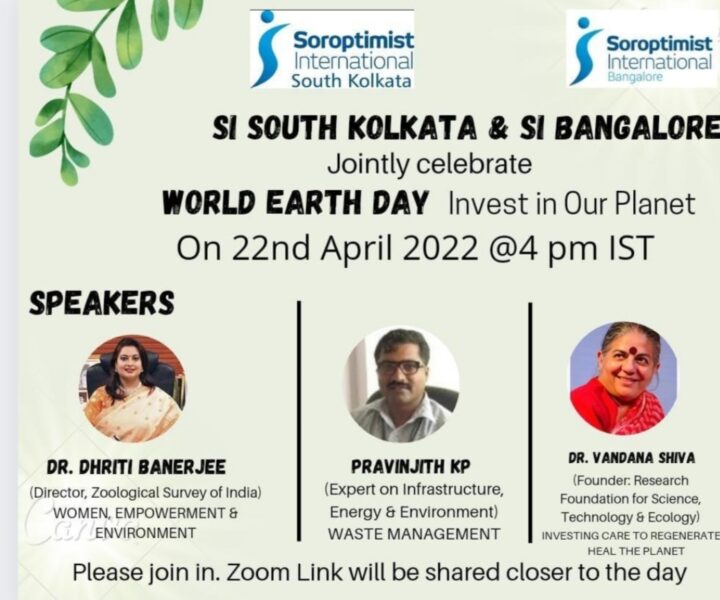 COVID made everyone cower under covers! As all members were forced to remain indoors, they connected through webinars. SIB organised many in order to attract more charitable contributions and create awareness.

On April 22, SI Bangalore teamed up with SI Calcutta to celebrate the WORLD EARTH DAY with a special webinar.

Also called the Mother Earth Day, it is an important day every year, helping to raise awareness about conservation and biodiversity.

Dr Dhriti Banerjee, scientist and first woman Director of the Zoological Survey of India was the first speaker. She outlined the powerful role that women have always played for conservation, especially due to their empathy and feeling for future generations, at a time when the earth is scarce and straining on resources. She also rued that although women are guardians of the environment, their representation in national policies and representation is below 30%. It is important that we fight the poison of pesticides, which are polluting our environment and are carcinogenic, killing the earth and its living beings.

The next speaker was Dr Pravenjeet, an expert on environment, energy and infrastructure, who said that minimising waste and exploitation of the earth’s resources is the answer to our conservation problems. He showed a special Bio-Methanation Waste-to-Energy project, set up for the first time in Nashik, with the support of the government. It is a unique scheme that has helped to compost solid waste, sewage, generate electricity and convert carbon dioxide to energy. It is necessary to think in terms of new ecoparadigms, he said.

The last speaker, Dr Vandana Shiva, is also called an “environmental hero”. She outlined the tragedy of the rich, polluting countries of the world – mainly the US – trapping the poorer, smaller countries. Mother Earth is a vibrant, living being but everyone is caged in it, she said. Thus, harming others effectively harms ourselves. The theme of our discussion should be: “Invest in the Planet.” Mother Earth is not for Sale, she said, because we are all inter- connected. We need to take care of ourselves and our farmers.