Federation (SIGBI) Programme Action Awards were introduced in 2003 to honour the excellent work done by Clubs throughout our Federation. There is one award-winner per Programme Objective, plus an overall winner. 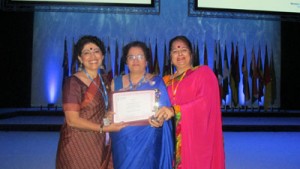 SIPME created a bit of a hat trick. For the fourth year running the Club earned nominations for Best Practice Awards. One of the nominations was for the Project Green Turn under the focus area of Environment Sustainability. The other nomination was for Gender Sensitization Project – One Billion Rise – under the focus area of Violence and Conflict Resolution. SIPME jointly won this award with 3 other clubs in India . The Gender sensitization projects were further honoured with the overall winner award shared with the mental health projects of Clubs in the Republic of Ireland. 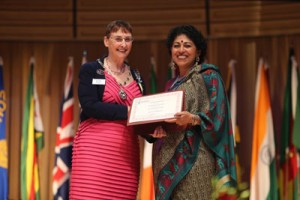 This project was conceived to make children particularly girls aware about organic farming and using sustainable ways to revive the land and help green the environment. Without such education, farmers will sell their land and families will move away from farmlands, which will be bad for future generations.

It is anticipated that a change in attitude by the children will lead to improvements in how the land is cared for. Follow up classes will keep the project alive for the school children. 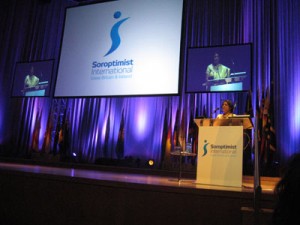 Besides being nominated for the Best Practice Award for Project Medical Outreach in the Food Security and Health category, SI Pune Metro East was asked to make a presentation on the project itself. Anupama Sen Convenor of the Project personally presented a film on the project.

This project has been carefully thought out and well planned by the club and is aimed at young girls and women in the slums who are first generation learners. They have had some education and some will be going to school but they grow up in very deprived conditions and are unable to make use of their education. They get little help and guidance from the home as their parents are often ill educated and illiterate.

The club decided the best way to help them was to provide them with life skills sessions. The sessions were on home budgeting and personal saving, grooming, anger management, health and nutrition, personal hygiene interpersonal relationships and first aid. These were to be followed was followed by craft classes. The project consists of a two day workshop of 6 sessions. The girls who took part responded well and two more Girls Moving Forward workshops were held in the first year.The fourth set of workshops was during the club’s first anniversary celebrations. Soroptimist visitors from other clubs as well as overseas were there each of them leading a workshop. It was a wonderful experience of bonding and giving. The fifth set of workshops was held in August 2011.

Because of the positive feedback from the girls who have gained confidence and skills, the club plan to run this project for three years and hold at least 4 workshops a year. It is successful mainly because the club work in partnership with friendship link clubs and local NGOs and also because all the sessions are conducted only by club members, who are putting their own skills to very good use.