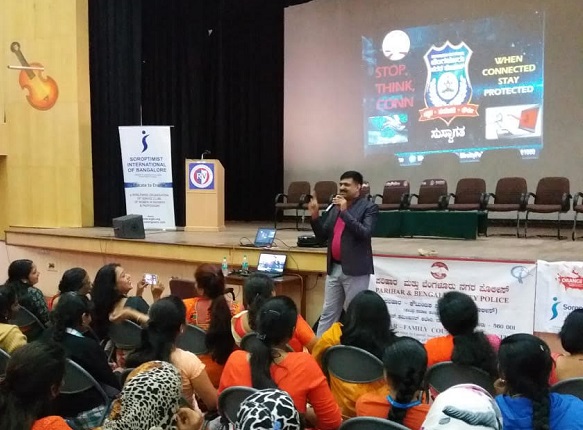 ‘Cybercrime’. This is becoming one of the most dangerous and major threats to women’s safety all over the globe. As we all know, Cyber crime is growing like an epidemic.

India being the largest user of mobile phones is at large risk. There is an urgent need to educate our women and girls about the need to be cautious in cyberspace. The tender users of the Internet know only how to use it but not the perils associated with it.

In cybercrimes against women, the effect is more mental than physical, while the focus of the laws ensuring women’s security is more about physical than mental harm. Technology is the resource used by some perpetrators, who target defamation of women by sending obscene WhatsApp messages, e-mail, stalking women by using chat rooms, websites, and worst of all by developing pornographic videos, mostly created without their consent, spoofing e-mails, morphing of images for pornographic content by using various softwares available online.

Indian women are not able to report cyber crimes immediately, as they are not really aware as to where such crimes can be reported, nor are they serious about reporting the same due to social embarrassment .

Their mindset needs to be changed to go ahead and lodge an immediate complaint. Most of the problems can be solved if women report the crime immediately and warn the abuser against taking strong legal action. This can be achieved by awareness programs. It would be even better when they get educated so that they would not fall prey to such conditions.

Cyber crimes increase generally through fake ids created on Facebook, Twitter and other social media platforms causing grave harm to women. Through these platforms, major blackmailing, threatening, bullying, or cheating via messengers, messages and email are perpetrated. Ill-intentioned men perpetrate these cyber-crimes with malafide intention such as illegal gain, revenge, insult to the modesty of a woman, extortion, blackmailing, sexual exploitation, defamation, inciting hate against the community, playing pranks and the satisfaction of gaining control to steal information.

Some of the major well-known cyber crimes include cyber harassment, cyberstalking, defamation, bullying, morphing and cyber pornography. They have pushed thousands of women into various health issues such as depression, hypertension, anxiety, heart disease, diabetes and thyroid ailments due to e-harassment.

When we approached NMKRV college, which is one of the biggest women’s graduation college in Bangalore, the principal, Dr.Snehalatha, requested us to arrange for a talk on dangers of social media as she comes across several related issues in the college. This made us approach Parihar, Police NGO and Cybercrime department of Bangalore city police.

We requested them to conduct the program in the college premises on the 11th of January, 2019. We had about 1000 students and faculty participating and benefitting from the program. Police officer Yashwanth Kumar from Cyber crime department (Bangalore city police) and senior counsellor, Rani Shetty,  Head in-charge of Parihar and Aparna Purnesh from Parihar conducted the program for us.

Topics on Women safety covered all the above mentioned problems and facts, along with different e-commerce frauds. The program also covered topics related to dangers a woman would face in a live-in relationship, different kinds of harassment at the workplace, sexual harassment within the family from kith and kin, different kinds of dangers one can face in a public transport and other public places.

We also discussed ways to deal with such situations. Solutions and prevention methods were discussed too. The talk also covered giving away information to the students about safety applications provided by our City Police Department for the safety of women, which can be downloaded in the smartphone and used during times of distress.

Finally, we had an interactive session. The half-day program seemed to not be enough as we proceeded. It was overwhelming to see all the 1000 girls and the faculty being so engrossed and involved in talks. The students were not ready to leave even after the program was over. They had several tough questions to the police officer regarding their safety.

Hence, we felt that the awareness program was needed. We will be taking this program to various other women’s colleges and institutions.