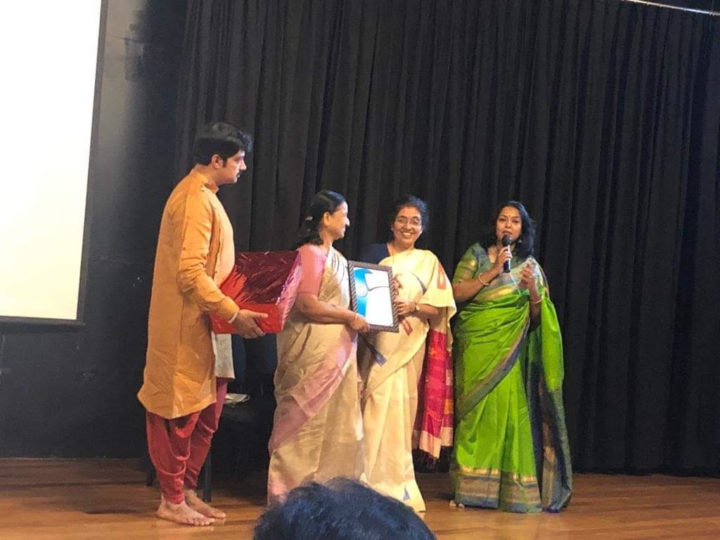 ‘HE for SHE’ is the solidarity movement for gender equality started by the UN. SI
Bangalore President, Mamatha Ghosh, went beyond the norm to say this can be
achieved even better when there is a ‘SHE for SHE‘ movement. It illustrated what Dr.
Tejaswani Anantkumar said – though the theme of this Women’s day is ‘Think Equal’,
she disagrees with it. Women are not just equal, but are more than equal, because
they always do more and go the extra mile.

This was visible on 16th March, 2019, in the way SI Bangalore celebrated Women’s
Day by introducing special recognition awards for “Women Inspiring Action and
Transforming Lives”. That award was presented by showcasing and honouring
women who have empowered themselves against all odds and educating
themselves in fields that can sustain them and their families.

Who would have thought that one could sit comfortably in the middle of MG Road, in
a quaint hall and experience an evening with several women chit-chatting, as the
chief guest put it, about their lives and getting exposed to amazing achievements.
The chief guests were Dr. Tejaswani Ananth Kumar, philanthropist and social activist
who runs Adamya Chetana and Guest of Honour Dr. Sanjay Shantaram, renowned
classical dancer.

It was fascinating to hear Dr. Tejaswani speak. She pointed out that this year’s
theme on Women’s Day was ‘Think Equal’ but she felt that Indian women have gone
beyond being equal. We are much more she said. She went on to describe how she
began her quest in 1997 on providing food, education and health, (anna, aksharya,
arogya), the three basic necessities, to the marginalised, because she had found
much disparity between the rich and the poor. Today, after 16 years, they have this
green kitchen where they provide midday meals to 1 lakh 75 children, without using
any fossil-fuel. Her kitchen also has zero garbage. She is totally into environmental
change, planting trees every Sunday and watering them with the washed rice water
generated in her kitchen. It was inspiring to see such dedication to a cause that is a
step towards improving the environment.

Dr. Sanjay reminded the audience that a year ago, he had conducted a mega fund
raiser with SI Bangalore, Matsyakanya. He felicitated Dr. Nalini Subbaiah for this and
also Ms Shobha Nilakantappa, SI Bangalore member. He assured everyone that he
was committed and ready to help the club in every way he could. His story too was
very inspiring – on how he began to learn dancing at the early age of five and how at
15 he was called to be a teacher of dancing, which he took up hesitantly, surprising
himself.

Since 17 years, he began to support NGO’s in India and abroad. Today, he has a
30-year-old dance school and has supported over 70 NGOs. He said he learnt from

his students and saw various issues the girls faced – those who could not afford to
learn at his dance school, some who could afford but had no support and others who
came only due to peer pressure. This made him help them and he then encouraged
everyone to be selfless and reiterated his support to SI Bangalore.
Their inspiring speeches were followed by honouring the eight women.

Christina and Pushpa were awarded for their work in 24 slums, holding 64
community meetings per year, touching the lives of many, including1,600 children

Shanti Muniswamy, a transgender, artist, poet and writer, who chose to exercise her
right to sexual orientation, addressed the people via drama.

Pushpa, self-taught bike rider, went on to drive a van after she lost her husband. She
had to take care of her two very small children. Now, she drives school children back
and forth between home and school.

Yashoda is a cab driver, who takes care of her family single-handedly today.

Divya is aspiring to sit for her civil service exams and is self-funding her education,
as a cab driver. It was her belief in herself that has brought her to her comfortable
situation today.